Work: I've changed jobs again! I'm now contracting for eHealth NSW as a BA in their Real-Time Prescription Monitoring program. Yes, I'm back working on the same product, but from the customer side this time. The client is based in Sydney, of course, so I'm working fully from home again, and travelling to Sydney for about a day per month. I'm sure the travel will get tiresome eventually, but I don't mind it for now.

House renovations: Materials costs went through the roof in the last couple of years, so we've scaled back our plans. Instead of partially demolishing and rebuilding, we're going to do a series of small projects to improve the house gradually.

We started by building a wall to close in an internal doorway between the old lounge and dining room. The lounge is now an office and spare bedroom, and the dining room is now a bedroom. It came up pretty well for a first attempt!

Then, in the last few weeks we've had the external parts of our chimneys removed, and an internal wall taken out to open up the kitchen and a former bedroom into a single living area, which has made a huge difference. It's a great feeling to finally be shaping the house to our needs.

I recently learned about the "prefers-color-scheme" media query, and I've added it to this site - it should now display in either light mode or dark mode based on your device's system setting.

I've added a page to collect my hiking thoughts, learnings, and experiments.

It's starting to feel like Spring - or Guling. A lot of indigenous Australian cultures observe more than four seasons, and I figure it's a good idea to learn the local Wurundjeri ones, which are all named for the flora and fauna that show up at that time of year. Guling means "orchid" in the Woi Wurrung language. It's a short season of about a month that roughly equates to early Spring. It's when most of the wattle trees flower, and is closely followed by Poorneet, the tadpole season. Need to get those summer veggies started!

We've further expanded the veggie garden onto a chunk of lawn that didn't get much use. Why not, when we're going to (eventually) renovate and have to re-think the back yard anyway? It's currently smothered in a thick layer of mulch to keep the grass from coming through, but in another month or so we'll be planting it out for Summer.

I've been enjoying the occasional 2-3 hour walk. I tried a 15km walk with a 6.6kg pack last weekend, and that felt good. Legs got a bit sore during, but no issues after. Now I'm doing lots of reading about ultralight hiking... Our 2-person tent, which I thought was small and light, is 3kg! I wonder if I could manage a tarp?

Wow it's been a while since the last update!

Work: I decided to move on from my last job after nearly eight years. A month ago, I started working at State Library Victoria for a 9-month contract as a business analyst on the implementation of a new library management software system. It's been really nice to start out in a new industry. After two years at home it's quite a shift to get back into the commuting mindset! But I'm enjoying being in the office for three out of five days.

Cargo bikes: We electrified our Yuba Kombi, but it's been having a few drivetrain issues and needs some upgrades. We're not sure if we'll sell it or keep it. Meanwhile, we bought a Tern HSD. We're loving how small it is; the fastest route to our kid's school includes a stupidly-designed bridge over a creek, which we avoided on the larger bike because of the tight corners. On the HSD, it's pretty easy to navigate. It also fits in the lift better at work!

House renovations: These are in the very early stages, in that we've up to the final draft of the floor plan. I'd like to think the building could start this year, but that's iffy.

I DIY'd some running boards for our new cargo bike!

Getting ready for another year!

We're both still working from home. My employer's got no firm plans for us to return to the office, which suits me! Down with commuting!

Our kid's going to turn four in a few weeks, and start kindergarten, and we'll need to start figuring out school for next year, whoah.

After the weirdness of 2020, and an intense few years before, I'm very ready for things to feel more settled in 2021. I'm hoping we can do some minor renovations and travel around Australia a bit - and, fingers crossed, get back to NZ for a visit at some point.

I've changed roles at work again, from product owner back to business analyst, still with the same team.

What else? Well, we're still in COVID-19 lockdown here in Victoria, hoping that the numbers improve soon so that our regular lives can resume. I'm liking working from home though; I hope to keep doing it indefinitely.

I've changed roles at work; I'm now the Product Owner for my company's real-time prescription monitoring products, which are used by Australian state governments to reduce the harm from controlled drugs (e.g. opioids) by tracking their prescribing and dispensing and providing health practitioners with information about their patients' medical history to support their decision-making. The first such system is currently live in Victoria.

It's been a full and difficult six months since my last update; there were some family tragedies, a road trip to Canberra, a holiday to Nelson, and all the busyness of daily life with a toddler.

I did build that sandpit, and Vera's been loving it. She turned two in February and she's getting really busy and talkative and generally having a great time.

My partner will soon return to permanent part-time work instead of her current unpredictable casual job, and I'm reducing my hours to a four-day week. Here's hoping 2019 will be a quieter, gentler year.

It's Spring again, and since last year our back yard has come along well! It now has four raised vege beds (about 8m2 in total); several fruit trees and berry bushes off to a decent start; a granite sand barbecue area; and a bit of lawn that I'm quickly finding better uses for (next project: a sandpit for Vera made from some log segments).

My partner is doing some casual work, about 20 hours per week, and I've reduced my hours to a nine-day fortnight. If her work keeps up and my company allows it, I may even get to do a four-day week.

I'm moving from Technical Writing into a Business Analysis role at the same company. I think it's a good move.

It's Spring, and Daylight Savings time. A few weeks ago we hired a guy with a digger to remove all the rubble and couch grass from our back yard and level the soil. Since then, we've planted fruit trees and berry bushes and figured out a basic site layout; now we're immersed in trying to get the lawn and vege garden in place before Summer.

My dad died on the 8th of May, at home, in the late afternoon, at the age of sixty, five days after suffering a heart attack and having a stent put in one of his arteries. We don't know the exact cause, but his doctor wrote "Most likely primary arrythmia or ventricular rupture". It seems to have been quick and painless.

The heart attack came out of the blue; although heart disease runs in the family, Dad was in good health, had none of the risk factors, and hadn't complained of any chest pains.

He was a beautiful man who lived for his family, and we all miss him terribly.

We spent a couple of weeks with my family in New Zealand. Now, I'm back at work, wondering what medical tests I should get, and thinking about all the house renovation questions I wanted to ask Dad.

Vera, meanwhile, is a pro traveller. At three months old, she has her own passport and has slept happily through two international flights.

Following the birth of our daughter, I'm now back techwriting four days a week at Fred, learning how to function on less sleep.

I've decided to close my Twitter account, because it had reached the point of diminishing returns; it was fun back in 2008-2010, but for the last few years I'd only used it for non-creative procrastination and the occasional tech writing vent. Plus, I feel worn out by news, marketing, and the modern internet in general. I don't miss Facebook (having quit it a couple of years ago) and I don't think I'll miss Twitter either.

I'll probably be a little more active in posting life updates here; and you can email me at fraser@fraserdron.com. I'd love to hear from anyone who stops by.

Our daughter Vera was born on February 11th. 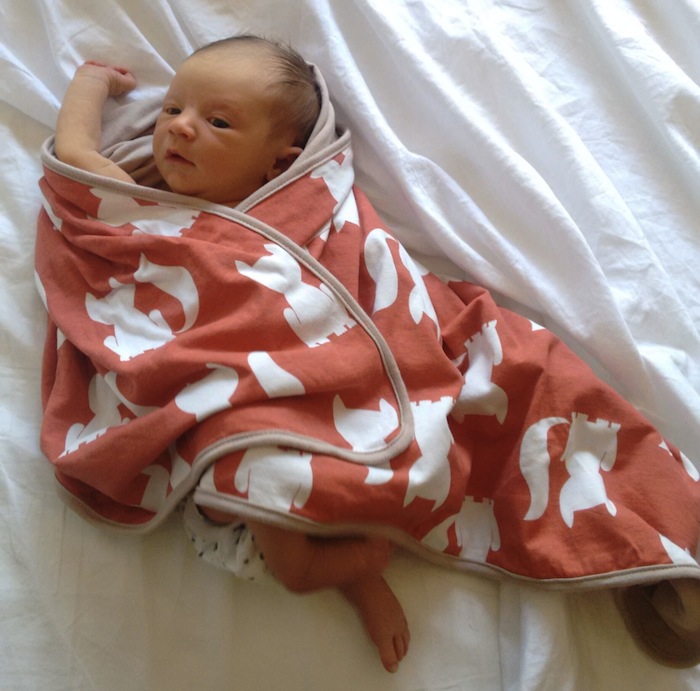 It's early days, but I think she likes us.

I'm taking a couple of weeks of parental leave; then I'll be back techwriting at Fred four days a week.

It's summer in Melbourne. My fiancee and I are expecting the birth of our first child, a daughter. The due date is today, so she'll arrive any day now!

We bought an old brick house in November 2015 and we've lived in it for a year now. We've had to do a lot of basic repair and renovation work - the previous few owners had let it go - and now we're taking a break from big projects. But we're excited to do more in the next couple of years. On the list are:

Since June 2014, I've worked at Fred IT Group, who make software for pharmacies. I spent a lot of 2016 working as a business analyst (and tech writer and QA) on the first phase of the MedView project. I'm starting 2017 back in the Operations department, doing a mixture of product documentation, internal documentation, knowledge systems management, and knowledge strategy.